'Le Petit Refuge Morzine' is one of three newly-converted apartments in this beautiful old farm house, entirely renovated, in a historic area of Morzine.

Just a few minutes drive from the centre of Morzine, it’s close enough to the bars and restaurants of Morzine to enjoy great apres-ski, but when you return to this 3 star apartment, you can relax in the indoor jacuzzi or enjoy the peace and quiet of the mountains that surround you. It’s also opposite a bakery, so you won’t have far to go for fresh bread and croissants in the morning!

The ski bus stops 50m away, giving you access to all the Portes du Soleil resorts in France and Switzerland. Larger groups can rent 'Le Petit Refuge Morzine' with the other apartments in the building - Le Loft (sleeps 12) and La Terrasse (sleeps 10) - and even the luxurious Villa Solaire next door, which sleeps 14.

The owner chose a bright and light Scandinavian style for 'Le Petit Refuge Morzine', which is on the middle floor of the farmhouse and sleeps 7. The open plan living area has a cosy wood-burning stove, and cosy sofas around the television. A large dining table is big enough for everyone to eat together, and the kitchen, although compact, is very well equipped.There are three en suite bedrooms, with two double beds and three singles, and a separate toilet.The living room has access to a balcony, from which you can enjoy beautiful mountain views. On the ground floor, there's a shared ski store and laundry, as well as the Jacuzzi and sauna - a great place to relax after an energetic day in the mountains.

Morzine is in the centre of the Portes du Soleil, making the neighbouring resorts of Les Gets and Avoriaz easily accessible. You can also ski in to Switzerland, but be warned, only the most accomplished skiers should tackle the Swiss Wall - a huge mogul field which is classified as an orange route - too hazardous for a black! But with 650km of pistes, there is plenty of scope for skiers and boarders of all ages and abilities. The ski bus stops just 50m from 'Le Petit Refuge Morzine', making this luxurious chalet the perfect base to discover the area. If you’re not a skier, Morzine also offers indoor and outdoor ice skating rinks, which are often host to ice hockey matches, and the local cinema often shows films in English. The more adventurous might like to try snowmobiling or ice-climbing on some of the area’s frozen waterfalls, or discover the area in a more sedate manner on a sleigh ride. Other ways to have fun include snowshoeing and sledging, while the Indiana adventure park offers a variety of activities for all ages.

When the snow melts, the lush green slopes around Morzine become a haven for walkers, mountain bikers and thrill-seekers. The lifts will take you and your bike up the mountains, into the heart of Europe’s biggest mountain biking area. There are a variety of trails, from gentle family rides to the rather more challenging Portes du Soleil circuit, which will take you in to Switzerland and back. Morzine has earned Famille Plus status for its excellent childcare facilities and entertainment - a perfect choice for young families. There are superb water parks in town and in neighbouring Avoriaz, plus two summer sledging runs, while the Indiana adventure park has a range of assault courses to suit all ages and abilities. Golfers will find excellent courses in Les Gets and Avoriaz. Other activities include climbing, rafting, via ferrata, canyoning, mini-golf, quad bikes, fishing and kayaking. You can also take advantage of the Portes du Soleil Multi Pass, offering unrestricted access to the full range of family activities, at an exclusive rate of 2€.

The traditional Savoyarde town of Morzine and the neighbouring resorts of Avoriaz and Les Gets offer plenty of variety for a holiday, whatever the time of year, but if you venture a little further, there’s plenty more to discover. The Portes du Soleil resorts cross the border into Switzerland, giving you two countries and two cultures to experience. It’s just over half an hour’s drive to Lake Geneva, where you can explore lakeside resorts the pretty spa town of Evian-les-Bains, or the beautiful medieval village of Yvoire. You can take also cruise to other lakeside towns such as Lausanne and Montreux. In Chamonix, just an hour’s drive away, you can take a ride on the second-largest cable car in the world, and take in the spectacular views from Mont Blanc. Geneva airport is just over an hour away from 'Le Petit Refuge Morzine', so if you don’t manage to see everything this time, you’ll just have to come back again next year! 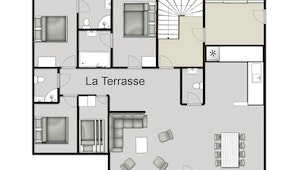