Built as a barn in 1826, no expense was spared converting this property into a luxurious holiday villa, sleeping 14 people comfortably. Much of the original material was imaginatively re-used, such as the roof slates, which became the surround for the swimming pool.

Just a few minutes drive from the centre of Morzine, Villa Solaire, a 5 star chalet, is close enough to the bars and restaurants of Morzine to enjoy great apres ski, but when you return to the villa, you can enjoy the peace and quiet of the mountains that surround you. It would be a great base for two or three families, or a large group of friends.

There is garaging for three cars, and the ski bus stops 50m away, giving you access to all the Portes du Soleil resorts in France and Switzerland. There’s a huge range of activities in the area, all year round, but you might find it hard to tear yourself away from the swimming pool, billiard room, home cinema and bars offered by this fabulous property!

Morzine is in the centre of the Portes du Soleil, making the neighbouring resorts of Les Gets and Avoriaz easily accessible. You can also ski in to Switzerland, but be warned, only the most accomplished skiers should tackle the Swiss Wall - a huge mogul field which is classified as an orange route - too hazardous for a black! But with 650km of pistes, there is plenty of scope for skiers and boarders of all ages and abilities.

The ski bus stops just 50m from Villa Solaire, making this luxurious chalet the perfect base to discover the area. If you’re not a skier, Morzine also offers indoor and outdoor ice skating rinks, which are often host to ice hockey matches, and the local cinema often shows films in English. The more adventurous might like to try snowmobiling or ice-climbing on some of the area’s frozen waterfalls, or discover the area in a more sedate manner on a sleigh ride. Other ways to have fun include snowshoeing and sledging, while the Indiana adventure park offers a variety of activities for all ages. The large flat garden is perfect for making snow angels and snow men at the end of the day!

END_OF_DOCUMENT_TOKEN_TO_BE_REPLACED 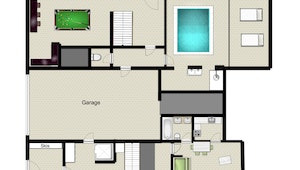 A huge thank you for this wonderful stay in this majestic setting! We had great family experiences and created unforgettable memories. Space is ideal for all of them. Congratulations for the realization of this unique place.